Latest: Area 52 Track. What to Expect! 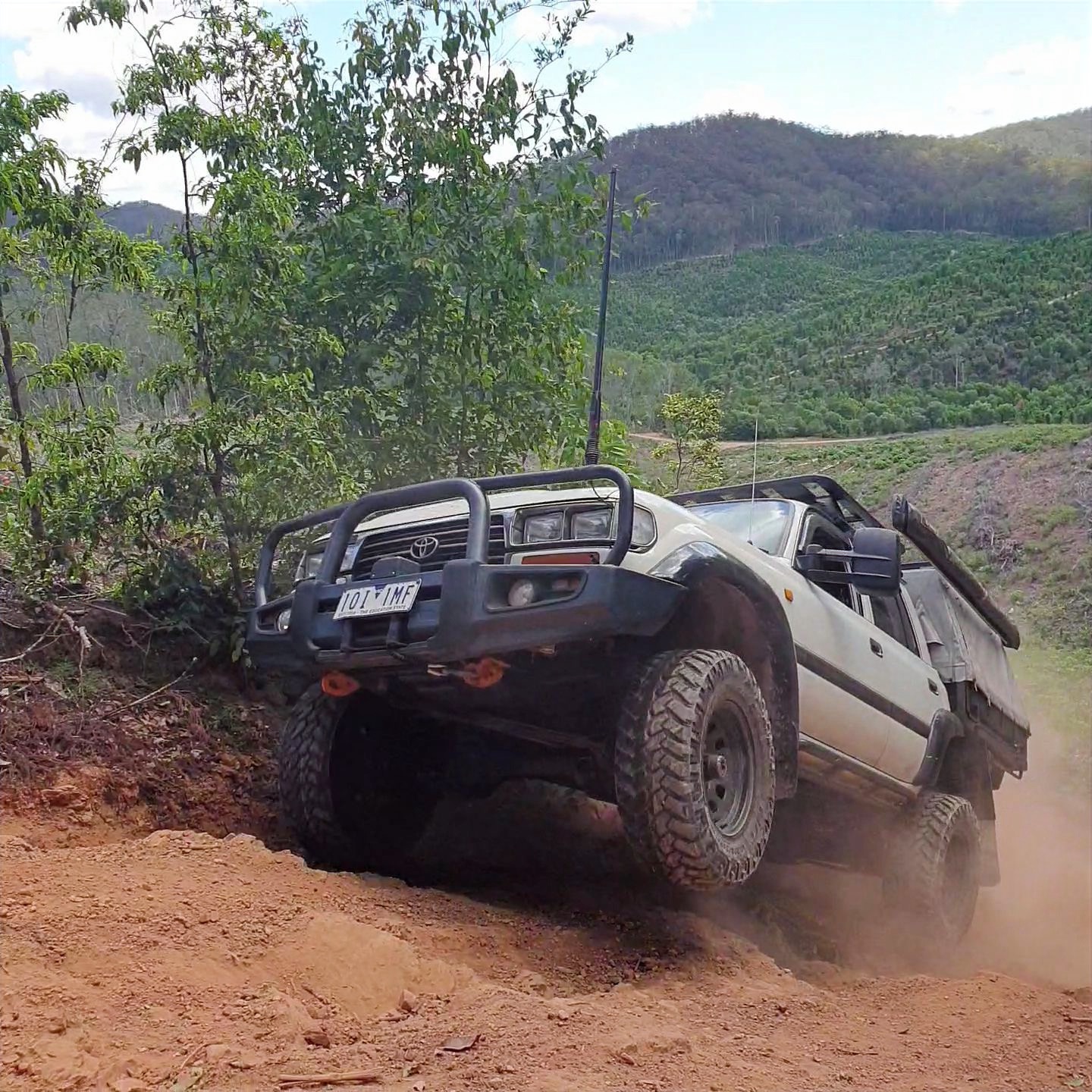 Area 52 is the latest track to hit the circuit. This circuit was routed in 2 stages with different vehicles so as to test the abilities of the vehicle against the challenges. The stages of testing are set out below:

MQ TRITON: Ol' Hoss was running 33" MAXXIS RAZR MT772 mud tyres, a 2" lift and an adjustable suspension and no lockers.

ISUZU MUX: 32" all-terrain tyres, 2" inch lift and no locker. (not sure of brand tyres, but they were off-road all terrain)

In terms of difficulty, the track firmly sits in between Hells Bells Track and Black Ops. In this section there are several challenges and steep drop offs all of which are loose and rocky. A very good set of tyres is needed for this track. There is one section that can put us in a very uncomfortable angle if we are not careful.

The first stage within this 20km of wheeling throws at us several really cool climbs and descents. Nothing dangerous, but 100% 1st gear low range descents and climbs that can be crawled with a good line and others that require some mumbo. Rock steps and tree root steps are plentiful during these sections.

There is one possible winch point at a climb I call "Winch Hill" for the sake of simplicity. Those without lockers have a good chance of winching here. Those with a rear locker should be fine. Winch Hill is super loose terrain and very steep. I always set up a winch anchor before climbing it. I had to winch up here, as did the MUX. The Patrol walked up it on his 35's.

Overall, the terrain is very rocky and the "feel" of Area 52 is very different to Imbil and Kenilworth. That being said, the views are always magnificent. It doesn't stop giving you the most spectacular vistas.

Moving on, we come across a ferocious hill climb I have named "The Grizzly". Its steep. Very steep! The moment I laid my eyes on this climb, I thought "yeh, yeh, nah, nah" and backed out. So did Nick with his MUX. Trust me, when I say its intimidating. (If you read on, in Stage 2, I ended up climbing The Grizzly in Ol' Hoss and after a small winch, I conquered it)

The big Patrol however, after a good 20 minutes of thinking, considering and deliberating, had a shot at it. Sure enough, on his 35" tyres, he bellied up on the section that causes the most grief. It was a winch from there and once out of the rut thats deep enough to run a small creek, it was continued climbing from there.

The Grizzly is AN OPTION only. Those that are not comfortable in doing this section, can surely pass and we can meet around the other side of the mountain. Walking this section alone is difficult given the angle it sits at, so sitting inside your rig with the car waiting at idle while you gather enough courage to climb it takes some doing. Its one of the most committing climbs I have witnessed.

So in this first stage that runs for 20km, there a good fistful of good times. Guaranteed!

After we completed The Grizzly, that concludes the first stage of Area 52 and we move on to Stage 2, which was ran with a different crew on a different date. Let's get into it.

This was done a few week later after Stage 1 and had an impressive line up of rigs in tow. We started from the very beginning with the intention of finishing the entire 40km circuit. The trucks were:

Remember "Winch Hill" above? With both 79's twin locked and the 80 Series rear locked, they made it although it was a scramble. My triton, with open diffs, had to winch again.

The Grizzly was tough on my vehicle and had to winch. The more I have a crack at this one, the more I'll feel confident in beating it. The 79's, again twin lockers engaged, had to winch. The 80 Series, who ran last, made it up without issues but got some tremendous wheel lift as did the 79's. The rut to the left is like a sink hole. Our mate, on his pro dirt bike even struggled on The Grizzly. You'll see :)

The last 20km of Area 52, has a good mixture of everything. Lots of cruisy chilling out wheeling while soaking up the views is a massive welcome after completing Stage 1 and gives the rigs a good rest. Then we come to a gnarly climb that doesn't stop giving. Its steep and like everything else on Area 52, its littered with loose boulders and not to mention a switch back to the left whilst maintaining revs for the climb. We sent our buddy on his dirt bike up first and he lost traction and after several attempts, he was buggered and called it a day (the rider is very fit and very experienced and after nearly 5 hours on the bike, he had had enough). All our rigs made it up and boy was it fun.

After this little bit, we have some more cruisy dirt roads to follow which is very welcoming as the rigs get a thorough workout to this point until we come to final stretch that has even more climbs (and some pin striping) that are steep but definitely not impossible. We then make our way to the finish line and air tyres back up.

If you have read this far, I thank you. It is very hard to give a track justice in words without writing an essay and actually driving it. The guys LOVED it. Area 52, in unanimous agreement with ALL drivers (the Patrol, MUX, the two 79's and the 80 series) is that Area 52 is a DIFFICULT track. Allow 6-8 hours to complete and allow for contingencies.

Like Hells Bells and ESPECIALLY Black Ops, Area 52 Track is a track for experienced wheelers and modified rigs only. A winch is 100% essential. All up, it simply does not disappoint.

Hope to see you soon,

780km: How the Launch of the First Annual VHC SuperTour Went Down!